Out of the Dark »

Out of the Dark 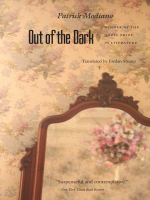 Patrick Modiano, winner of the 2014 Nobel Prize in Literature, is the author of more than thirty books and one of France's most admired contemporary novelists. Out of the Dark is a moody, expertly rendered tale of a love affair between two drifters.

The narrator, writing in 1995, looks back thirty years to a time when, having abandoned his studies and selling off old art books to get by, he comes to know Gérard Van Bever and Jacqueline, a young, enigmatic couple who seem to live off roulette winnings. He falls in love with Jacqueline; they run off to England together, where they share a few sad, aimless months, until one day she disappears. Fifteen years later, in Paris, they meet again, a reunion that only recalls the haunting inaccessibility of the past: they spend a few hours together, and the next day, Jacqueline, now married, disappears once again. Almost fifteen years after that, he sees her yet again, this time from a distance he chooses not to bridge. A profoundly affecting novel, Out of the Dark is poignant, strange, delicate, melancholy, and sadly hilarious.