We Were Feminists Once »

We Were Feminists Once: From Riot Grrrl to CoverGirl&#174;, the Buying and Selling of a Political Movement 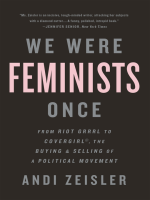 Feminism has sold out, or so argues Andi Zeisler, the founding editor and creative director of Bitch magazine: Today's feminism is a choose-your-own adventure story. Women can choose which aspects of feminist empowerment sound the sexiest, and hype those to the exclusion of more urgent political concerns.
Today, feminism is no longer a dirty word, and women purporting to stand up for women's equality now include high-powered names like Beyoncé, Taylor Swift, and Emma Watson. Hip underwear lines sell granny pants with “feminist" emblazoned on the back. In every bookstore, there are scores of seductive feminist how-to business guides telling women how to achieve “it all." In fact, it's the same kind of sloganeering and wishful thinking that sells low-fat yogurt on TV commercials: get a gym membership, get a job, get a husband, wear a power suit, enter the boardroom. Meanwhile, access to abortion clinics is growing ever more difficult for many women across the country, and Arizona has passed a law requiring doctors to tell women undergoing an abortive procedure about a junk science method of “reversing" abortion espoused by the Tea Party right. Feminism has gone mainstream, but true equality is never an easy sell.
Drawing on almost 20 years of experience covering popular culture from the frontlines of the feminist movement, Andi Zeisler will tell a cultural history through the stories of institutions and real women, feminists and otherwise, in America. She exposes how feminism has transformed into something barely warranting the name, ignoring the many for the one, shamelessly colluding with market forces and popular culture. This kind of feminism is not particularly nuanced, and it doesn't challenge identities and hegemonies as much as it offers nips and tucks. It is no longer a collective action on behalf of all women and those traditionally marginalized, but more about self-actualization of the few. Witty and fearless, We Were Feminists Once is story of how we could have let this happen, and where we go from here.