Blood on the Leaves »

Blood on the Leaves 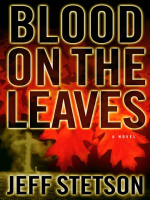 Description
As the only Black prosecutor in Jackson, Mississippi, James Reynolds has found himself in the center of the biggest and most controversial case of his career—and his actions will have a ripple effect for generations to come.In the 1960s, racism was rampant in Jackson, Mississippi, and it was common for white men caught in the act of killing Blacks to be acquitted by all-white juries. But 40 years later, someone is seeking justice; those same men are turning up dead - in the identical manner in which they killed their victims. Now, James Reynolds, who has overcome the odds - and his own personal demons - to become the only Black prosecutor in Jackson, will face the toughest case of his life: He'll have to prosecute prime suspect Martin Matheson, a brilliant professor, the son of a venerated Civil Rights leader, and the newly appointed folk hero for thousands of African Americans hungry for retribution.
Also in This Series