Q & A (filmed as Slumdog Millionaire) 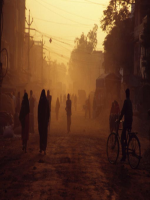 Sony Academy Awards, Gold Award Winner, 2008, Drama Category. Q and A has recently been made into the feature film Slumdog Millionaire, winner of 4 Golden Globes.

A street kid wins the Indian TV show "Who Will Win A Billion" - scooping a billion-rupees prize live on Indian TV. Unfortunately, the producers think he must have cheated.

Based on the best-selling novel by Indian diplomat Vikas Swarup and from the makers of A Suitable Boy, Fatherland and Handmaids Tale, the production was recorded on location on the streets of Mumbai with an Indian Cast.

When Ram Mohammad Thomas, an orphaned, uneducated street kid from Mumbai, wins a billion rupees on a live TV quiz show, he finds himself beaten up and thrown in jail by the programme's producers. During his interrogation he explains, through a series of flashbacks, how he knew the answers to all the show's questions. What he describes about his life is jaw-dropping - "You learn a lot about the world by living in it" he says...

His account takes us on an extraordinary adventure through every strata of modern-day India, from orphanages to brothels, gangsters to beggar-masters, into the homes of Bollywood's rich and famous, a well meaning, but ineffective British Missionary, and a seedy Australian diplomat.

Using a quiz show format, the drama is punctuated with scenes from the TV studio. 10 questions, 10 answers - and with each answer the stakes get higher.