The curse of Anne Boleyn »

The curse of Anne Boleyn: a novel 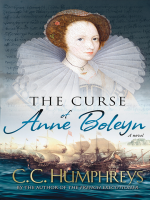 "If you like Bernard Conwell's Grail Quest series, you'll love The French Executioner and The Curse of Anne Boleyn. To my mind Cornwell is good, but Humphreys is better." –Sally Zigmund, Historical Novels Review (UK)

From the masterful C.C. Humphreys comes the captivating sequel to The French Executioner

Nearly twenty years have passed since Anne Boleyn died at the hands of her slayer and savior, Jean Rombaud. All he wants is to forget his sword-wielding days and live happily with his family. Yet her distinctive six-fingered hand, stolen at her death—and all the dark power it represents—still compels evil men to seek it out.

When Jean's son, Gianni, joins the Inquisition in Rome and betrays all his father worked for, Jean discovers that time alone cannot take him—or his son—far from his past. But he never expected his whole family, especially his beloved daughter Anne, to become caught up once more in the tragic queen's terrible legacy.

From the savagery of way in Italy to the streets of London and Paris and the wilds of North America, The Curse of Anne Boleyn sweeps readers into a thrilling story that puts love, loyalty, and family to the ultimate test.

"With The French Executioner, Humphreys established himself as a quality purveyor of historical detail and vigorous action...This unusual story line is dispatched with consummate skill." –Good Books Guide (UK)