All that is bitter & sweet »

All that is bitter & sweet: a memoir 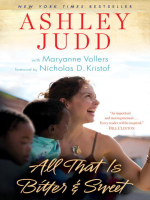 Description
Ashley Judd is best known as the acclaimed actress in films such as De Lovely and Double Jeopardy, but these days she is more likely to be found wading through an African refugee camp or Asian brothel than on a film set. For most of the past decade Judd has been visiting human rights hotspots around the world to spread the word of hope, health, and gender equality on behalf of one of the leading public health nonprofits, PSI/YouthAIDS. Her work has put her in the company of Bono, Bill Clinton, and other world leaders in the battle against disease and poverty and in advocating grassroots programs to improve the lives of women and children. Memories of her own painful childhood inspired Judd to reach out to those in desperate need, especially abused and abandoned girls. She writes movingly of friends such as Kausar, an AIDS sufferer in the slums of Mumbai who becomes an activist and peer-educator, and heroes such as Dr. Rene, who lends his heart and soul to keep the sex workers of Madagascar from contracting and spreading HIV. Judd also describes her own personal spiritual journey of discovery that takes place during the interludes between her trips overseas. Through being of service to others, she unlocks the door to her own unsettled past, including an abusive childhood, and later on, her issues with co-dependency and depression. Through the act of bearing witness to others, Judd finds her own path to healing. Her recovery becomes integral to her ability to continue her humanitarian work. It reaffirms what her faith teaches her: "When I change myself I help change the whole world." Judd recorded her experiences both abroad and at home in more than five hundred pages of journal entries, which she has woven into a highly personal and powerful memoir about change, hope, and human transformation.
Also in This Series