The Battle of the Bulge »

The Battle of the Bulge 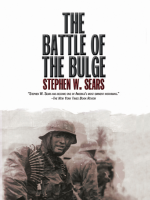 Description
In the middle of December 1944, at a time when most people thought Germany was finished, the German army launched a surprise attack against the American army in Belgium. Thousands of crack troops and large numbers of tanks breached the thin American lines and drove deep into Belgium. The Battle of the Bulge would be a brutal, bloody struggle in a dismal winter landscape against an enemy imbued with Adolf Hitler's fanatic conviction that victory could be snatched from defeat. Before it ended, the Battle of the Bulge would involve over a million men and thousands of guns, tanks and other fighting vehicles. In that dark December, fighting both bitter winter storms and a grim and determined enemy, the American soldier faced his greatest challenge in the European war.