One Soldier's Story: A Memoir 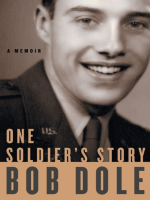 At last, in his own words, Bob Dole tells his legendary World War II story—a personal odyssey of tremendous courage, sacrifice, and faith

In One Soldier's Story, Bob Dole tells the moving, inspirational story of his harrowing experience in World War II, and how he overcame life-threatening injuries long before rising to the top of the U.S. Senate. As a platoon leader in the famed 10th Mountain Division, 21-year-old Bob Dole was gravely wounded on a hill in the Italian Alps just two weeks before the end of the war. Trying to pull his radioman to safety during a fire-fight against a fortified German position, Dole was hit with shrapnel across his right shoulder and back. Over the next three years, not expected to survive, he lapsed in and out of a coma, lost a kidney, lost the use of his right arm and most of the feeling in his left arm. But he willed himself to live.

Drawing on nearly 300 never-before-seen letters between him and his family during this period, Dole offers a powerful, vivid portrait of one man's struggle to survive in the closing moments of the war. With insight and candor, Dole also focuses on the words, actions, and selfless deeds of countless American heroes with whom he served, including two fellow injured soldiers who later joined him in the Senate, capturing the singular qualities of his generation. He speaks here not as a politician, but as a wounded G.I. who went on to become one of our nation's most respected statesmen. In doing so, he gives us a heartfelt story of uncommon bravery and personal faith-in himself, his fellow man, and a greater power. This is the World War II chronicle that America has been waiting for.