HE IS ONE OF THE MOST HAUNTING CHARACTERS
IN ALL OF LITERATURE.

AT LAST THE EVOLUTION OF HIS EVIL
IS REVEALED.

Hannibal Lecter emerges from the nightmare of the Eastern Front, a boy in the snow, mute, with a chain around his neck.

He seems utterly alone, but he has brought his demons with him.

Hannibal's uncle, a noted painter, finds him in a Soviet orphanage and brings him to France, where Hannibal will live 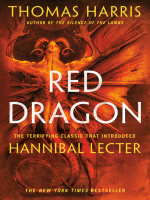 A serial murderer known only by a grotesquely apt nickname—Buffalo Bill—is stalking women. He has a purpose, but no one can fathom it, for the bodies are discovered in different states. Clarice Starling, a young trainee at the FBI Academy, is surprised to be summoned by Jack Crawford, chief of the Bureau's Behavioral Science section. Her assignment: to interview Dr. Hannibal Lecter—Hannibal the Cannibal—who is kept under