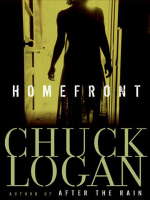 The daughter of ex-cop Phil Broker andex-army major/anti-terrorist operative Nina Pryce, Kit Brokeris no ordinary eight-year-old. She has seen more — and survived more — than most grown-ups. And now she has inadvertently invited a nightmare into the lives of those she loves.

Phil Broker and his family moved to tiny Glacier Falls, Minnesota, to heal from the psychological wounds they received while helping to avert an inhuman act of terror. But young Kit chose the wrong adversary when she triumphed over local schoolyard bully Teddy Klumpe — for the boy's disreputable clan does unholy business from the darkest shadows of their small town . . . and they do not forgive. What begins as a minor feud between neighbors quickly escalates into a major offensive of intimidation, destruction, fear . . . and death. And the worst is yet to come — because terror has come home.