All or Nothing: A Novel 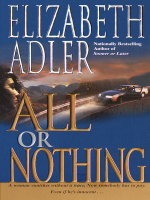 With the flair for sizzling romantic suspense that has made her books international bestsellers, Elizabeth Adler, whose work has been hailed by critics as "mesmerizing" Internet Bookwatch, "exhilarating" Publishers Weekly, and "sensuous" Kirkus Reviews, is at the top of her form with her latest novel, All or Nothing. Lithe, leggy attorney and law professor Marla Cwitowitz is dying for some excitement in her life--that is, other than being the girlfriend of Al Giraud, private detective, sexy soul mate, and all-around best friend. So when she sees the potential for a crime-solving spree, she jumps at the chance to moonlight as a detective. According to the evening news, local real estate agent Laurie Martin is missing and presumed dead. Marla and Al happened to have seen her dining with an attractive man several days before her disappearance. The man is Steve Mallard, loyal husband, doting father, and prime suspect. But Marla senses that something is not quite right. And her intuition has never let her down. Believing that there's more to the story than meets the eye, she takes matters into her own hands, vowing to get to the bottom of what's beginning to look like a very complex case. Al wants Marla to stay out of the way, fearing for her safety. He knows what's involved in detective work, and he's not sure she can hold her own as an investigator. But she won't be warned off this case. Their relationship has never been more fraught with complications--or sexual sizzle. With little warning or preparation, the two find themselves crisscrossing the United States in frantic pursuit of a remorseless criminal in an effort to prove Mallard's innocence. Finally Marla's found the excitement she's been looking for. With her, it's always been all or nothing.