We're All In This Together »

We're All In This Together: A Novella and Stories 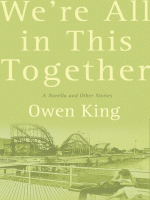 Description
Imaginative, gripping stories, along with the brilliant title novella set in Maine after the 2000 election, carry the weight of real emotion and revelation and showcase the impressive versatility of a rising talent. Owen King is a writer interested in the choices we make when we're most conflicted. A young husband must decide whether or not to commit a ghoulish crime; a baseball player in a fantastic 1930s Coney Island is assailed by the guilt of an illicit romance; a nineteenth-century itinerant dentist finds himself snowed in with a group of trappers for a long evening of primitive surgery and laughing gas reveries. Whether they're set in the past or the present, tinged with the macabre, the solemn, or the absurd, all of the stories in this collection carry the weight of real emotion and revelation and showcase King's impressive versatility. In his novella, King tells the story of George, the teenage son of a single mother, and the only grandson of a family of union organizers in Maine. George's grandfather Henry, obsessed with the outcome of the 2000 election, has planted a giant billboard of homage to Al Gore in his front yard that he suspects has been defaced by the paperboy, now a sworn enemy. Meanwhile, George's mother is about to marry Dr. Vic, who, besides being possessed of an almost royal obliviousness, may even have voted for George W. Bush. George is a nervous accomplice to his grandfather's increasingly unhinged behavior, and a righteous adversary at war with his mother over her marriage. George's struggle is a funny and moving parallel for our times: How will we fight? All together, or all alone? Funny, insightful, and always entertaining, We're All in This Together launches the career of an extraordinarily talented writer.
Also in This Series