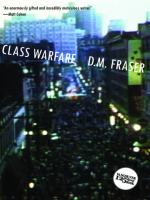 A remarkable story collection about the radical anti-establishment of the 1970s by the late D.M. Fraser, one of Canada's most underappreciated writers. Comprised of assertive missives and richly hued character studies, Class Warfare is a gloriously written call to arms firmly rooted in the politics and culture of the 1970s; a paean to the disenfranchised about the possibilities of "the sweetness of life." First published in 1976 but never before released in the United States, Class Warfare includes an introduction by Arsenal Pulp Press' co-founder Stephen Osborne. D.M. Fraser was Arsenal Pulp Press' editor until his death in 1985 at age thirty-eight. We would have slept forever, if it had been possible; but it was not possible. The noise of gunfire woke us. The siren in the street, the crack of truncheon on skull, the groaning of muscle and crashing of blood, in all the unrewarded labours of the world, woke us. The shouts of the dying penetrated into that sleep, dragged us half-blind and staggering out of the lovely dreams, the sheltered nests we thought were ours by right, into this wakefulness, this cold and unforgiving daylight. There was no other choice.