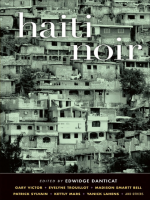 "A wide-ranging collection from the beloved but besieged Caribbean island," from a lineup of authors including two National Book Award finalists (Kirkus Reviews).

"The Haitian-born Danticat has brought her country's literature back into the world of English-speakers. Filled with delights and surprises, Haiti Noir, taken as a whole, provides a profound portrait of the country, from its crises to its triumphs, from the tiny bouks of the countryside to the shanties of the sprawling bidonvilles. Danticat herself has a lovely story in the collection, and permits two distinguished foreign writers on Haiti, Madison Smartt Bell and Mark Kurlansky, to slide in there among all the brilliant Haitians." —Daily Beast

"This anthology will give American readers a complex and nuanced portrait of the real Haiti not seen on the evening news and introduce them to some original and wonderful writers." —Library Journal