What Dies in Summer »

What Dies in Summer 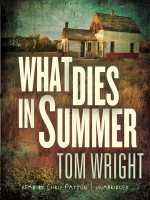 "I did what I did, and that's on me." From that tantalizing first sentence, Tom Wright sweeps listeners up in a tale of lost innocence. Jim has a touch of the Sight. It's nothing too spooky and generally useless, at least until the summer his cousin L.A. moves in with him and their grandmother. When Jim and L.A. discover the body of a girl—brutally raped and murdered—in a field, an investigation begins that will put both their lives in danger.

In the spirit of The Lovely Bones and The Little Friend, What Dies in Summer is a novel that casts its spell on the very first page and leaves an indelible mark.