Oppose any foe: the rise of America's Special Operations Forces 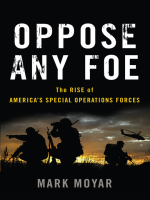 Description
"In a nation where the military is revered, America's Special Operations Forces are the exception to the rule. From raiding enemy compounds under cover of night to advising international resistance movements, special operators have earned a reputation for extraordinary skill and daring. Yet, by the same token, they are accused of overreaching, siphoning personnel from other units, and recklessness that does more harm than good. In Oppose Any Foe, Mark Moyar chronicles the rocky seventy-five year existence of the Special Operations Forces (SOF), from the first Army Rangers during World War II to today's much-lauded Seal Team Six. Since its inception, SOF's popularity, funding, and power have gone through dramatic cycles of boom and bust. Presidents from Roosevelt to Kennedy to Obama have championed the tactical precision of SOF and have allocated them huge budgets, only to have their ambitions undermined by military disasters, infighting at the Pentagon, or congressional opposition. Indeed, the "elite" status of the SOF has led to acts of hubris and dangerous plays for more power with far-reaching consequences. While prejudice against the SOF may be easy to understand, Moyar argues that the Special Operations Forces are a powerful tool--but one which we have yet to properly utilize and appropriately incorporate into military planning. Oppose Any Foe is an ambitious work of military history, but it is propelled by gripping tales of military courage. Weaving together thrilling stories of SOF missions and insightful analyses of the programs' successes and failures, Moyar offers an important institutional coming of age story."--Provided by publisher.
Also in This Series