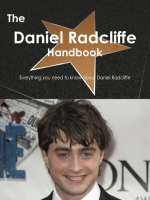 Radcliffe made his acting debut at age ten in BBC One's television movie David Copperfield (1999), followed by his film debut in 2001's The Tailor of Panama. Cast as Harry at the age of eleven, Radcliffe has starred in eight Harry Potter films since 2001, with the final instalment released in July 2011. In 2007 Radcliffe began to branch out to stage acting, starring in the London and New York productions of the play Equus and the 2011 Broadway revival of the musical How to Succeed in Business Without Really Trying. The Woman in Black (2012) will be his first film project following the final Harry Potter movie.

This book is your ultimate resource for Daniel Radcliffe. Here you will find the most up-to-date information, photos, and much more.