Reagan's Secret War: The Untold Story of His Fight to Save the World from Nuclear Disaster 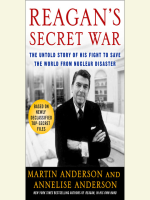 Description
On February 6, 1981, at his first National Security Council meeting, Ronald Reagan told his advisers: “I will make the decisions.” As Reagan’s Secret War reveals, these words provide the touchstone for understanding the extraordinary accomplishments of the Reagan administration, including the decisive events that led to the end of the Cold War.
Martin Anderson and Annelise Anderson drew upon their unprecedented access to more than eight million highly classified documents housed within the Ronald Reagan Presidential Library in Simi Valley, California–unseen by the public until now. What emerges from this treasure trove of material is irrefutable evidence that Reagan intended from his first days in office to bring down the Soviet Union, that he considered eliminating nuclear weapons his paramount objective, and that he–not his subordinates–was the principal architect of the policies that ultimately brought the Soviets to the nuclear-arms negotiating table.
Also in This Series