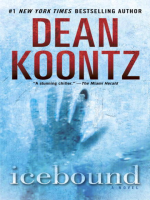 BONUS: This edition contains an excerpt from Dean Koontz's Odd Apocalypse.A secret Arctic experiment becomes a frozen nightmare, when a team of scientists are set adrift on an iceberg--with a murderer in their midst, and a massive explosive charge only hours away from detonation. This original early Koontz novel--in the tradition of Winter Moon--is now available in large print edition, releasing simultaneously with Ballantine's mass market edition.