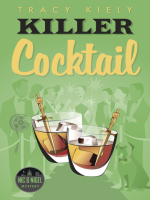 Description
Walking the red carpet at the Academy Awards with a bow-tied Bullmastiff draws Nic and Nigel Martini plenty of attention from the press. But that�s nothing compared to the attention they receive at the A-list after party, when Hollywood royalty learn they�ve discovered behind-the-scenes footage from an acclaimed film that left one of its stars dead. Returning home after the party, Nic and Nigel find their house in shambles and their employee DeDee Evans beaten within an inch of her life. And when the weapon used to pummel DeDee implicates a beloved actress, Nic and Nigel drink and banter their way into a modern-day version of a golden-age crime caper.
Also in This Series