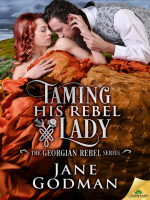 Can the heat of passion burn too bright?

In the six months since the Jacobites met defeat at Culloden, the English have ruthlessly routed the remaining rebels. Now Sir Edwin Roxburgh rides to claim Cameron House, his reward for his loyalty to the king.

His welcome comes at the point of a sword. It's only after a fierce fight that Edwin discovers that underneath the banned tartan, the "boy" he's just wounded is none other than the lady of the house.

If the crown thinks Lady Iona Cameron will allow an English soldier to turn her out of her own home, the crown is sadly mistaken. She never thought her desperate attempt to defy authority would send her to a traitor's death—unless she agrees to marry Roxburgh.

Edwin quickly realizes he has his hands full trying to control the fiery, rebellious widow—and trying to control his own desire to fill his arms with her beautiful body. But he has a dark past that makes love not only impossible, but dangerous—especially if Iona manages to slip past his guard.

Warning: Contains a rebellious heroine with a secret identity, and a hero with a secret past who's determined to tame her wild ways. Be warned: his methods are erotically unusual.