Running the Bulls: A Novel 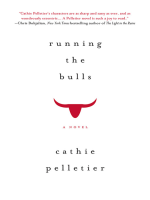 Description
2006 Paterson Prize for Fiction"That master juggler of literary tears and laughter is at it again: Cathie Pelletier's Running the Bulls is a ribald, ruminating, and redemptive read."-Wally Lamb, author of She's Come Undone

In small-town Maine, unhappily retired Howard Woods is shaken awake one morning by his wife, who confesses to a devastating affair. Unable to forgive his wife, Howard sets out on a journey in hope of finding life after tragedy.

Determined to follow in the footsteps of Hemmingway, Howard travels to Pamplona, Spain to join the running of the bulls. His life promptly descends into chaos. But how does a middle-aged homebody, who has never even done his own laundry, salvage his manhood and pride and learn how to rebuild his life on his own?

At once funny, insightful, and heartbreaking, Running the Bulls is perfect fans of Olive Kitteridge (Elizabeth Strout), The Language of Flowers (Vanessa Diffenbaugh), and The Good House (Ann Leary) who will be transfixed by this coming-of-age story of a late-middle-aged man.

Also from Cathie Pelletier, The Mattagash Series:The Funeral Makers (Book 1): Welcome to Mattagash, Maine where everyone's personal lives are as entwined as their family trees.A Wedding on the Banks (Book 2): Amy Joy Lawler just announced her engagement-to an outsider!The Weight of Winter (Book 3): Surviving the winter will be hard; dealing with each other is another story. The One-Way Bridge (Book 4): Return to Mattagash-the anything but tranquil town where a mysterious dead body has just been found in the woods.

What readers are saying about Running the Bulls

"Running the Bulls is filled with humor, and frailty, and heroism, and is so very human."

"Cathie Pelletier has once again given us a gift from the heart to both tickle and break our hearts."

What reviewers are saying about Running the Bulls

"Nobody walks the knife-edge of hilarity and heartbreak more confidently than Cathie Pelletier. In Running the Bulls she's at her skillful, sure-footed best."  Richard Russo, Pulitzer Prize-winning author of Empire Falls

What people are saying about Cathie Pelletier

"Cathie Pelletier generates the sort of excitement that only writers at the very top of their form can provide."-Stephen King

"It is Pelletier's gift to be able to coax the drama from stony ground without artifice or sentimentality."-Boston Globe

"Cathie does a wonderful job of capturing [her characters'] moods and loves and losses, and yearnings...Her writing is lovely and so descriptive"— Annie Philbrick, Bank Square Books, Mystic, CT