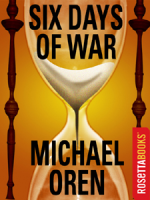 For six tense days between June 5 and 10, 1967, war raged between Israel and its neighbors, Egypt, Jordan, and Syria. There are many contexts in which this story makes sense, but only Michael Oren, a widely published American-born Israel scholar and historian, has so far knitted the diverse strands into a cohesive fabric that remains vital and relevant today. With educated authority and authorial integrity, Oren manages to sketch out facts and motives with the same intrigue as battles and strategies.

Escalating territorial and populist tensions in the Middle East only serve to make this title more relevant. Anyone who wants to have a grasp of Middle Eastern politics or political tensions involving Israel must read this title. Six Days of War was a New York Times Bestseller and Washington Post Best Book Award Winner in 2002 and has gone on to be an internationally acclaimed bestseller. The book has been widely recognized as the definitive telling of the Six Day War.