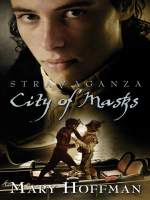 Set in Talia, a parallel world very similar to 16th-century Italy, the narrative follows Lucien, who in our world is very ill. Given a marbled notebook to use as a diary, the notebook is the unexpected means that transports Lucien to this dangerous new world; a world that thrills to the delight of political intrigue and where a life can be snuffed out with a flash of a merlino blade. The city of Bellezza (Venice in our world) is astonishingly evoked, with a filmic eye to detail, from the sensuousness of silks and velvets, to the thrill and danger of assassination attempts both and foiled and successful.

The world of Talia is unforgettably and convincingly real.