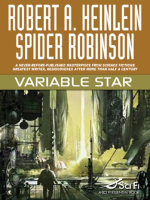 Upon his death in 1988, Robert A. Heinlein left a legacy of novels and short stories that almost single-handedly defined modern science fiction. But one of Heinlein's masterpieces was never finished. In 1955, he began work on Variable Star, a powerful and passionate tale of two young lovers driven apart by pride, power, and the vastness of interstellar time and space. Then he set it aside to focus on other novellas.

The detailed outline and notes he created for this project lay forgotten for decades, only to be rediscovered almost a half-century later. Now the Heinlein estate has authorized award-winning author Spider Robinson to expand that outline into a full-length novel. The result is vintage Heinlein, faithful in style and spirit to the Grand Master's original vision.

When Joel Johnston first met Jinny Hamilton, it seemed like a dream come true. And when she finally agreed to marry him, he felt like the luckiest man in the universe. There was just one small problem—he was broke. His only goal in life was to become a composer, and he knew it would take years before he was earning enough to support a family.

But Jinny wasn't willing to wait, and when Joel asked her what they were going to do for money, she gave him a most unexpected answer. She told him that her name wasn't really Jinny Hamilton—it was Jinny Conrad, and she was the granddaughter of Richard Conrad, the wealthiest man in the solar system. Now that she was sure Joel loved her for more than just her wealth, she revealed her family's plans for him: he would be groomed for a place in the vast Conrad empire and sire a dynasty to carry on the family business. Most men would have jumped at the opportunity. But Joel Johnston wasn't most men. To Jinny's surprise, and even his own, he turned down her generous offer and then set off on the mother of all benders—and woke up on a colony ship heading out into space. There he found himself torn between regret over his rash decision and his determination to forget Jinny and make a life for himself among the stars. He was on his way to succeeding when his plans—and the plans of billions of others—were shattered by a cosmic cataclysm so devastating it would take all of humanity's strength and ingenuity just to survive.