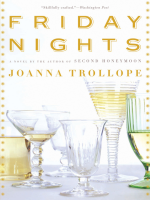 From the master of literary domestic drama, a page-turning novel that dissects the complexities of female friendship and the choices that define women's lives. It is Eleanor who starts the Friday night get-togethers. From her window she sees two young women, with small children, separate, struggling, and plainly lonely--and decides to ask them in. What began as a lark soon becomes a ritual, and the circle widens to include six very different women. They range in age from Jules, who is twenty-two and wants to be a DJ, to Eleanor herself, a retired professional who walks with a stick. They include one wife, three mothers, three singles, and five working women. All of them, variously, value Friday nights. Until one of them meets a man--an enigmatic, significant man--and the whole dynamic changes. The bonds that have been so closely forged are tested--and some of them break. With wit and warmth, Joanna Trollope explores the complexities, the sabotages, and the shifting currents of modern female friendship.