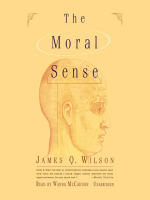 Virtue has acquired a bad name, says Wilson, but it is nevertheless what we are referring to when we discuss a person's character, such as whether someone is kind, friendly, or loyal. Although we may disguise the language of morality as a language of personality, it is still, in Wilson's words, "the language of virtue and vice."

Says the author, "This book is not an effort to state or justify moral rules; that is, it is not a book of philosophy. Rather, it is an effort to clarify what ordinary people mean when they speak of their moral feelings and to explain, insofar as one can, the origins of those feelings."