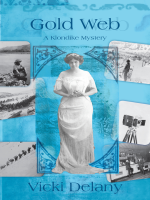 The fourth in Delany's Klondike Mystery series is a madcap romp through the mud of 1898 Dawson City.

Book Four of the Klondike Mystery Series by Vicky Delany!

The year is 1898. The place is Dawson City, Yukon. A man staggers out of the dusk to collapse at the feet of a startled Fiona MacGillivray, shattering the peaceful calm of a warm July night. Before breathing his last, he gasps two words: "MacGillivray, Culloden." Fiona doesn't know the man and she would prefer not to find out why he linked her name with the "bloodiest of all battles."

As international intrigue abounds and handsome Corporal Richard Sterling of the NWMP searches for the murderer, Fiona's son Angus takes a job as a photographer's assistant, a new dancer almost causes a riot, and Fiona tells herself she is not at all bothered by the amount of attention Richard Sterling is paying to the pretty and charming photographer, Miss Eleanor Jennings.