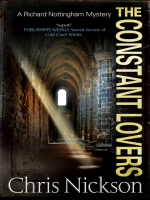 A tale of greed, ambition and thwarted love in eighteenth-century Leeds

July, 1732. On a hot summer morning, Richard Nottingham, Constable of Leeds, is called out when a young woman is found stabbed to death among the ruins of Kirkstall Abbey. In her pocket is a love note: "Soon we'll be together and our hearts can sing loud, my love. W."

What happened to the maid who accompanied her mistress on her final, fatal journey? Who is the mysteious 'W' who signed the note? Nottingham must delve into the dark secrets of the rich and influential to uncover the truth.