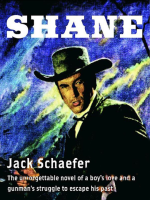 This unforgettable story of the friendship between a farm boy and a gunman struggling to escape his dark past was made into a critically acclaimed movie in 1953 that became a classic standard for Westerns. Shane, a mysterious traveller and ex-gunfighter, enters into the life of Joe Starrett and his family and carves a place for himself in their hearts. Although he tries to leave his gunslinging past behind, revealing little about himself and refusing to even carry a gun, the family senses a quiet tension about him, like a slow-burning fuse. In the end, Shane decides to fight cattle baron Luke Fletcher and hired gun Stark Wilson in order to break the power of the cattlemen over the homesteaders and save Joe Starrett's farm. The story is told through the eyes of young Bob Starrett, who regards Shane with an awe and reverence tempered by the boyishness of the Old West.