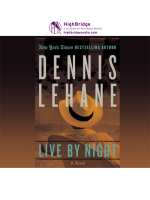 Description
In 1926, during the Prohibition, Joe Coughlin defies his strict law-and-order upbringing by climbing a ladder of organized crime that takes him from Boston to Cuba where he encounters a dangerous cast of characters who are all fighting for their piece of the American dream. By 1926, Prohibition has given rise to an endless network of underground distilleries, speakeasies, gangsters, and corrupt cops. Joe Coughlin, the youngest son of a prominent Boston Police captain, defies his proper upbringing and his father's strict law-and-order orthodoxy. Graduating from a childhood of petty theft to a career in the pay of the city's most fearsome mobsters, Joe enjoys the riches, thrills, and notoriety of being an outlaw. But life on the dark side carries a heavy price. In a time when ruthless men of ambition armed with cash, illegal booze, and guns battle for control, no one can be trusted. For men like Joe one fate seems more likely than all others, an early death.
Also in This Series