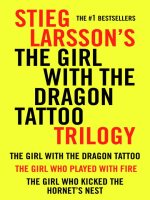 Description
“Lisbeth Salander is one of the most original characters in a thriller to come along in a while.”
—The New York Times

The Millennium series that began with The Girl with the Dragon Tattoo has become this generation’s international bestselling phenomenon.

Disgraced crusading journalist Mikael Blomkvist has no idea of the levels of conspiracy he will uncover when is enlisted to investigate the unsolved disappearance nearly forty years ago of a Swedish industrialist’s niece. And when the pierced and tattooed computer savant Lisbeth Salander joins him, together they unearth layers and layers of secrets and scandals that permeate the highest levels of society, from politics to finance to the legal system itself—at the bottom of which lies unimaginable cruelty perpetrated on the weak. In the course of these three shocking, unputdownable thrillers, we encounter one of the most heroic of survivors, as she battles some of the most heartless villains ever imagined.
Also in This Series