Mrs. Robinson's Disgrace: The Private Diary of a Victorian Lady 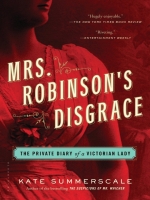 "I think people marry far too much; it is such a lottery, and for a poor woman—bodily and morally the husband's slave—a very doubtful happiness." -Queen Victoria to her recently married daughter Vicky

Headstrong, high-spirited, and already widowed, Isabella Walker became Mrs. Henry Robinson at age 31 in 1844. Her first husband had died suddenly, leaving his estate to a son from a previous marriage, so she inherited nothing. A successful civil engineer, Henry moved them, by then with two sons, to Edinburgh's elegant society in 1850. But Henry traveled often and was cold and remote when home, leaving Isabella to her fantasies.

No doubt thousands of Victorian women faced the same circumstances, but Isabella chose to record her innermost thoughts-and especially her infatuation with a married Dr. Edward Lane-in her diary. Over five years the entries mounted-passionate, sensual, suggestive. One fateful day in 1858 Henry chanced on the diary and, broaching its privacy, read Isabella's intimate entries. Aghast at his wife's perceived infidelity, Henry petitioned for divorce on the grounds of adultery. Until that year, divorce had been illegal in England, the marital bond being a cornerstone of English life. Their trial would be a cause celebre, threatening the foundations of Victorian society with the specter of "a new and disturbing figure: a middle class wife who was restless, unhappy, avid for arousal." Her diary, read in court, was as explosive as Flaubert's Madame Bovary, just published in France but considered too scandalous to be translated into English until the 1880s.

As she accomplished in her award-winning and bestselling The Suspicions of Mr. Whicher, Kate Summerscale brilliantly recreates the Victorian world, chronicling in exquisite and compelling detail the life of Isabella Robinson, wherein the longings of a frustrated wife collided with a society clinging to rigid ideas about sanity, the boundaries of privacy, the institution of marriage, and female sexuality.