Rainbow in the Mist »

Rainbow in the Mist 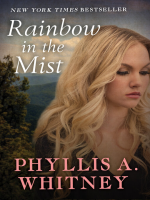 A psychic investigates a mysterious disappearance high in the Appalachian Mountains in this novel from a "Grand Master of her craft" (Barbara Michaels). It's a legacy Christy Loren never wanted. The unwitting inheritor of her mother's psychic gifts, the Long Island librarian assists in police investigations, but they've become too hard for her to bear. Too many victims. Too many shallow graves. So she's fled to the peaceful foothills of the Blue Ridge Mountains to stay with her aunt Nona. But Christy is soon drawn back into a world of terrifying visions—those of a female hiker who died under suspicious circumstances and an ethereal beauty named Deirdre who vanished into the mountain mist. Warned by her mother's eerie premonitions, threatened by strangers, and aided by Deirdre's tormented and attractive husband, Christy is beginning to see things no one else can. If there's a link between the two mysteries, Christy will find it—if she's not afraid to look deeper. New York Times–bestselling and Edgar Award–winning author Phyllis A. Whitney "piles on the suspense" in this novel of superstition, second-sight, and uncanny romantic tension (Publishers Weekly). This ebook features an illustrated biography of Phyllis A. Whitney including rare images from the author's estate.