Jefferson's America: the President, the purchase, and the explorers who transformed a nation 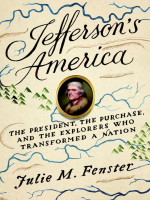 Description
Jefferson's America sheds new light on one of the key aspects of Jefferson's presidency. Almost everyone who has taken a U.S. history course is familiar with Jefferson's Louisiana Purchase and the travels of Lewis and Clark, but that's not where this formative episode in American history begins or ends. In fact, Jefferson sent four other expeditions West--Zebulon Pike was dispatched on two missions- first, to the headwaters of the Mississippi, and second, toward what is now Colorado. William Dunbar and Dr. George Hunter explored northern Louisiana and Arkansas. Peter Custis and Thomas Freeman (with military officer Richard Sparks) followed the Red River of North Texas and Oklahoma. The stakes for American expansion were enormously high--at a time when Britain, France, and Spain were also all vying for control of the vast expanse of land west of the Mississippi River, the geopolitics of discovery were paramount. Jefferson, a true student of the Enlightenment, sought out men of science to undertake these urgent missions into the frontier. But they weren't always well-matched--with each other, or even with the task of exploring itself. Tensions between Dunbar and Hunter in particular threatened to undermine Jefferson's progress, leaving the United States in danger of losing its foothold in the West. Jefferson's America will rediscover the robust and often harrowing action from those seminal expeditions and use them as a means of understanding the Jeffersonian era and the president's vision for a continental America.
Also in This Series