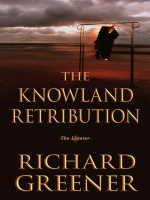 With tainted meat the weapon and corporate greed the motive, The Knowland Retribution is an extremely topical suspense-revenge thriller. Walter Sherman, a/k/a the Locator, is a tracker who honed his skills in Vietnam. The colorful cast of characters also includes Sherman's two friends—a bartender with a mysterious past and an old black man who smokes like a chimney; a feisty young woman who writes obituaries for the New York Times; a southern lawyer who has lost everything and has only one thing to live for; and a group of Wall Street investment bankers who make a deadly decision.

The action takes the reader from a tiny Caribbean bar on the island of St. John to the editorial boardroom of the New York Times, from the gleaming skyline of Atlanta to the isolation of northern New Mexico, from Adirondack hideouts to Manhattan suites to Mississippi backwoods.

This complex and compelling mystery thriller is the first in a series featuring Walter Sherman as the Locator.