Mina Wentworth and the... »

Mina Wentworth and the Invisible City 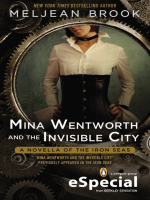 AVAILABLE DIGITALLY FOR THE FIRST TIME

After Mina is called in to investigate the murder of an aristocratic bounder, her husband Rhys—known to the world as the Iron Duke—must overcome his fear for his new bride before his need to protect her tears them apart. But when she invites him to join her at the murder scene, a search for a mysterious killing machine puts her in more danger than ever before...a danger that leads straight back to Rhys.

Previously published in The Iron Duke.