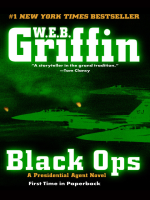 Description
The first disturbing report reaches Presidential Agent Charley Castillo as he sits down for Christmas Day dinner. The caller on the Virginia safe house's secure line confirms that an investigative reporter working for Castillo's European newspapers-and snooping after German and Russian thieves involved in the Iraqi Oil-for-Food scandal-has been brutally murdered in Marburg. Next comes the call from the director of National Intelligence, who asks whether Castillo knows anything about the Kuhls-an Austrian couple serving as Central Intelligence Agency deep-cover assets since World War II -who have just been found dead in a Vienna park, strangled by stainless-steel garrotes. And within hours Castillo learns of two assassination attempts that occurred on Christmas Eve. All narrowly escaped automatic-weapons fire from assailants unknown-unknown except for the fact that the hits were professional. As Castillo shares the news with his group of troubleshooters in the innocuously named Office of Organizational Analysis-a menacing mix of military and former CIA, FBI, Secret Service, and other agents-two conclusions are immediately reached. There's more than one big surprise in all this for Presidential Agent C. G. Castillo . . . if he can stay alive.
Also in This Series