Little Did I Know »

Little Did I Know: A Novel 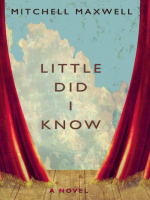 Here is the story of an unforgettable summer. Set in Plymouth, MA in the late seventies, Little Did I Know is the tale of a young man with an outsized dream – to refurbish a dilapidated but historic theater and produce a season's worth of vibrant musicals. A recent college graduate, he fills his cast and crew with people he has come to love and trust in his university life, and with others whose talents and personalities prove undeniable. Yet, while the productions drive his ambitions, a local woman drives his passions, and their romance is fateful, star-crossed, and ultimately more than either of them expected. Told with with, compassion, and the kind of insider's access to the theater that only someone like Mitchell Maxwell can provide, Little Did I Know is a novel about coming of age in the spotlight and embracing one's entire future in a single season.