The Man from Beijing »

The Man from Beijing 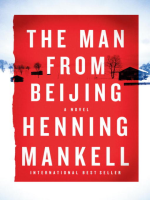 In the far north of Sweden a small, quiet village has been almost entirely wiped out by a mass murderer. The only clue left at the scene is a red ribbon. Among the victims are the grandparents of Judge Birgitta Roslin, who sets out to find the killer. Despite being brushed off by the police, Birgitta is determined to prove that the murders were not a random act of violence but are part of something far more dark and complex. Her investigation leads to the highest echelons of power and into the recesses of history where the seeds of evil deeds were planted.