By the Grand Canal »

By the Grand Canal 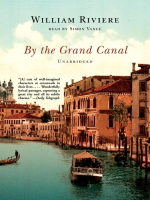 In the aftermath of the First World War, Hugh Thurne, a British diplomat involved in the peace negotiations, seeks solace in his rented palazzo in Venice rather than returning to his wife and the charade of his marriage in London. Although profoundly disturbed by the grim long-term prospects for peace, he has faith in the city's power to raise his spirits. Hugh eagerly looks forward to visits with his old friends Giocomo and Valentina Venier in their dilapidated palazzo by the Grand Canal, renewing his affair with a young opera singer Emanuela, and the arrival of Violet Mancroft, the widow of his best friend lost in the war. What he does not anticipate is the shadow lying over the Venier family's future—nor has he reckoned with the vagaries of his own heart.