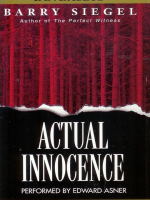 ACTUAL INNOCENCE BARRY SIEGEL Her fate was sealed in a verdict rendered five years ago when Sarah Trant was found guilty of slashing an old man's throat. All subsequent appeals have been denied. Now, six months from execution, she turns to the one man she hopes can save her attorney and former lover Greg Monarch. As his investigation into the original trial begins, Monarch discovers a case rife with flagrant misconduct by the prosecutor, concealed evidence, and witness tampering. But the sheltered valley where the alleged crime took place hides even more-a deep and disturbing conspiracy of silence that its residents must maintain at all costs.