The Book of Joe »

The Book of Joe: A Novel 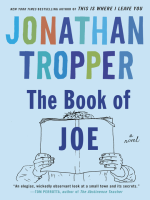 Description
Right after high school, Joe Goffman left sleepy Bush Falls, Connecticut and never looked back. Then he wrote a novel savaging everything in town, a novel that became a national bestseller and a huge hit movie. Fifteen years later, Joe is struggling to avoid the sophomore slump with his next novel when he gets a call: his father's had a stroke, so it's back to Bush Falls for the town's most famous pariah. His brother avoids him, his former classmates beat him up, and the members of the book club just hurl their copies of Bush Falls at his house. But with the help of some old friends, Joe discovers that coming home isn't all bad—and that maybe the best things in life are second chances.Fans of Nick Hornby and Jennifer Weiner will love this book, by turns howling funny, fiercely intelligent, and achingly poignant. As evidenced by The Book of Joe's success in both the foreign and movie markets, Jonathan Tropper has created a compelling, incredibly resonant story.
Also in This Series