The Curious Case of Benjamin Button: And Other Tales of the Jazz Age 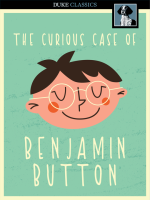 Recently the basis for a major motion picture starring Hollywood golden boy Brad Pitt, "The Curious Case of Benjamin Button" was written in 1922 by the golden boy of early twentieth-century American fiction, F. Scott Fitzgerald, author of such era-defining masterworks as The Great Gatsby and Tender is the Night. The tale follows the travails and triumphs of the title character, who is born in the body of an elderly man and becomes progressively younger over the course of his life.