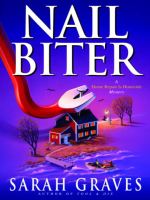 Description
Jacobia “Jake” Tiptree took the dangerous plunge from Wall Street power broker–to homeowner! Now the do-it-yourself enthusiast is about to discover that her own dream house is built on a foundation of murder.Buying a beachfront fixer-upper to lease out to Eastport, Maine’s, burgeoning tourist crowd seems like a good idea to Jake Tiptree and her best friend, Ellie White. But working double-time as landladies to a coven of wannabe witches isn’t what they had in mind. And it only gets worse when Jake is called out one stormy night to make a repair–and stumbles on a dead body in the utility shed.A small-time thief and street preacher with a particularly violent message, the deceased was no favorite of Jake’s–nor of anyone else in Eastport. But what’s he doing shot to death on Jake’s property? Jake’s bewitching tenants–including an ex-cop, a con man, and a mute teenage girl–claim to have been too busy conjuring spells to have heard or seen a thing. Then a member of the coven disappears without a trace and Jake doesn’t think it’s a case of witchcraft–but a kidnapping...or worse.Scandal, secrets, and a mysterious box buried deep in the foundation of her own home are just the beginning of a mystery that threatens to bring Jake’s house–and life–crashing down. Now she and Ellie are racing to find a missing girl who may be the key to it all...or lead them to a killer holding the final nails to their coffins.Praise for the Home Repair Is Homicide Mysteries of Sarah Graves:“Anyone who can mix slaughter and screwdrivers is a genius. Plus, anyone who has bought a home that needs even a new toilet seat is probably consumed with murderous thoughts.”—Boston Herald“Like the old Victorian homes she describes...Graves’ stories seem to grow better with the passing of time....Readers who enjoy solving mysteries and fixing up older homes will appreciate Jake’s do-it-yourself expertise in both areas.”—Booklist“A sleuth as tough as the nails she drives into the walls of her 1823 Federal home enhances a clever plot, which comes to an unexpected and explosive conclusion. Many will relish the vividly described Down East setting, but for anyone who’s ever enjoyed making a home repair it’s the accurate details of the restoration of Jake’s old house that will appeal.”—Publishers Weekly“Think Diane Mott Davidson with a tool belt instead of recipes!”—Denver Post
Also in This Series