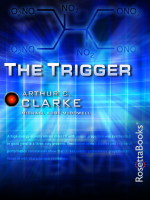 A "thought-provoking, suspenseful" political sci-fi thriller from the authors of 2001: A Space Odyssey and Star Wars: The Black Fleet Crisis (Library Journal).

In the near future, a team of scientists who intend to create an anti-gravity device inadvertently develop something far more powerful—a mechanism that can render guns and bombs virtually harmless. Their creation, "The Trigger," causes nitrate-based bombs and explosives to detonate automatically. The idealistic scientists who envision the benevolent use of their great invention soon discover that even protective weaponry comes with its own moral trade-offs.

Soon, every faction of the gun industry is involved—politicians, manufacturers, lobbyist, military—and the scientists must fight to keep the weapon out of violent hands. While negotiating this tricky territory, they realize that not even those with the best intentions can be trusted. There are no easy answers in this thriller that "lend[s] the familiar issue of gun control new urgency and excitement" (Publishers Weekly).