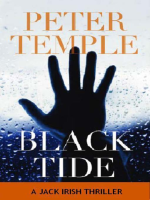 ack Irish is recovering from his last foray into the criminal underworld when he agrees to look for the missing son of Des Connors, the last living link to Jack's father. It's an offer he soon regrets, as he discovers that prodigal sons often go missing for a reason, and they always have something to hide. The second book in Peter Temple's Jack Irish series, Black Tide takes us back into a brilliantly evoked world of pubs, racetracks, and sports-not to mention intrigue, corruption, and violence. About the author: Born in South Africa, Peter Temple is one of Australia's most acclaimed writers, and has worked as a journalist, magazine editor, and teacher. He is the author of eight novels, four of which have received the Ned Kelly Award for crime fiction. Bad Debts and Black Tide are the introductory titles in his celebrated Jack Irish series.