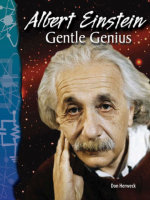 Albert Einstein is probably the most influential scientist and greatest physicist of the twentieth century. He revolutionized our ideas about time and space, and he is best known for his theory of relativity and his equation E=mc2, which explains the relationship between energy and mass. By age 30, he was considered by many to be one of the world’s greatest scientific thinkers.