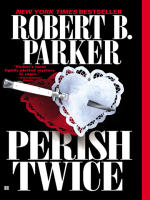 Description
When Robert B. Parker set his sights on creating a female protagonist to lead his newest series, the response was overwhelming. "Humane, shrewd, snappy, wonderfully diverting ...a gift," said The Washington Post of Family Honor. Newsweek called it "a first-rate piece of entertainment," and Parker was praised as "a master of the genre at work, writing with uncanny skill" by the Chicago Sun-Times. In Perish Twice, Sunny Randall comes to the aid of three very different women, with deadly consequences. Hired by prominent feminist Mary Lou Goddard to protect her from threatening phone calls and shadowy pursuers, Sunny must contend with Goddard's reluctance to reveal all she knows about the unwelcome attention bestowed upon her. When a member of Goddard's staff is gunned down, it's called a case of mistaken identity. And when the murder suspect is found to have eaten his own gun, two cases are settled, neither to Sunny's satisfaction. At the same time, Sunny must help both her dearest friend and her older sister, each of whom face wrenching personal battles. When the murder investigations lead her to the Boston underworld, Sunny's footing-despite backup from her close friend Spike and ex-husband, Richie-is treacherous at best.
Also in This Series