Dragonflight: Volume I in The Dragonriders of Pern 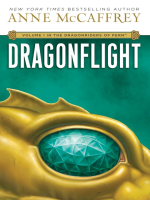 Description
One of the author's early Dragonrider adventures, set on the planet Pern, where deadly "thread" falls from the sky and puts all living creatures at risk. The symbiotic relationship of dragon and rider is the planet's only hope for survival. Dragonflight is the story of Lessa, the last of the noble bloodline of Ruatha Hold. The dragonriders rescue her from servitude while searching for likely candidates to impress the new dragon queen. Lessa is successful at imprinting Ramoth, the new queen, which makes her the leader of the Weyr and the mate of F'lar. As rider of the bronze dragon Mnementh, he is most suitable to lead the on-going struggle against the dreaded thread.
Also in This Series